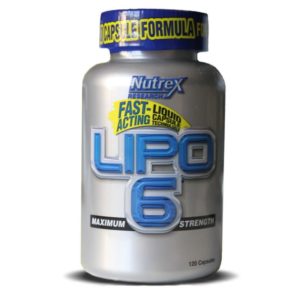 According to the Lipo-6 website, LIPO-6 by Nutrex is a powerful and extremely popular fat-burner that utilizes maximum strength liquid capsulesfor superior absorption and rapid results.

This highly advanced method of delivering fast-acting fat-burning compounds makes LIPO-6 a great choice when it comes to weight-loss products.

LIPO-6 Liquid Capsules will help you achieve rapid fat-burning results so you can have the body you always wanted.

However, none of the ingredients found in Lipo-6 have been proven to contribute to appetite suppression.

Lipo-6 actually currently contains legal ingredients. When it was first manufactured, it also contained ephedra. Ephedra has been eliminated from the formula.

The following are the five ingredients and amounts of them found in one serving of Lipo-6 (2 liquid capsules ((Just as a side note on the liquid capsule thingdont be fooled.

Liquid capsules havent been shown to be any more effective than powdered capsules, but companies continually market them as if theyre going to be the Next Big Thing. Theyve been around for a long time.)))

200mg Caffeine: In a study done by Belza et al. in Copenhagen Denmark, published in the European Journal of Clinical Nutrition, it was determined that caffeine boosted metabolism by six percent, while Green Tea and tyrosine didnt cause a statistically significant difference.

3mg Yohimbe: Comes from the bark of an African evergreen tree. It has been shown to increase fatty acid mobilization. It is also used to treat erectile dysfunction.

20mg Synephrine: Synephrine can be found in the citrus aurantium fruit, also known as bitter orange.

Is Synephrine effective? One study performed in December of 2007 looked at the lipolysis (fat loss) effectsof Satsuma mandarin orange (Citrus unshu Mark) peel on the fat cells of rats (I know, its always rats).

A high concentration of Synephrine was present in the peel and lipoloysis effects were present.

These results suggest that the segment wall, an edible fraction, from Satsuma mandarin orange might be useful as a functional food, especially as a fat-reducing material.

What the Research Says

While the individual ingredients of Lipo 6 have been researched, Lipo-6 itself has not. The results of studies on Yohimbe have been inconclusive.

However, the amounts of the ingredients found in Lipo 6 are not equal to those proven in studies.

Even if you took the maximum dosage of 6 liquid capsules per day, you would not come close to the necessary amount of Guggulsterones needed to increase metabolism.

Nutrex recommends taking two liquid capsules 30 minutes before breakfast or morning workout and two more liquid capsules in the afternoon. They also warn not to exceed 6 capsules per day.

Since Lipo-6 has not been studied itself, the side effects are those found in studies done on the individual ingredients. These side effects include:

The amounts of ingredients contained in Lipo-6 have not proven to be effective in promoting weight loss.

That combined with a lengthy list of side effects leads us to wonder why anyone would want to try this product. Dont waste your money.