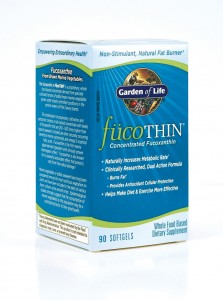 According to the Fucothin website, FucoTHIN creates a thermogenic effect without stimulating the central nervous system.

No jitters or sleeplessness as with other fat-burning products.

Fucothin is also supposed to boost the metabolism without an increasing heart rate.

Fucothin is comprised of two main ingredients in a proprietary blend Fucoxanthin and punicic acid.

Other ingredients include gelatin, extra virgin olive oil, glycerin, and purified water. According to the Fucothin website, Fucoxanthin, contained in FucoTHIN, is a compound that is found in several different types of seaweed.

Fucoxanthin is a carotenoid (similar to lutein and lycopene), which is a powerful antioxidant that protects cells from free-radical damage.

It is the pigment that gives brown seaweed its characteristic color and also participates in photosynthesis (the conversion of light into energy).

Punicic acid is derived from pomegranate seed oil. It has been proven to help eliminate fat cells.

Garden of Life, the Fucothin manufacturer, claims Fucothin contains 200-500 times as much fucoxanthin as typical seaweed.

Why do they give such a range; does the amount of fucoxanthin vary in each softgel?

The Fucothin website says only that each softgel is 200 mg, 5 mg of which are fucoxanthin.

It does not give a breakdown for the amount of the other ingredients (this is common among many diet pill companies).

What the Research Says about Fucothin

According to Garden of Life, taking Fucothin results in impressive weight loss. However, they have been slow to show any research findings.

They claim to have conducted several studies, but the only studies that have published have been those with rats and mice as the study participants; no findings for human studies have been published.

One study reportedly found, Participants followed an 1800 calorie diet and were monitored over 16 weeks.

Simply put, the fucoTHIN group lost significantly more weight than the group that DID NOT use fucoTHIN!

The research done to create Fucothin was all done in Russia by Russian scientists.

This might lead one to wonder why none of the research and development was done in America or even by American scientists.

A study done in Japan showed that fucoxanthin is not easily assimilated into the body.

This would lead us to believe that increasing the amount of fucoxanthin would not make a difference.

Garden of Life has previously had trouble with the FTC. The FTC website says,

The FTC charged that Garden of Life, Inc., a dietary supplement company based in West Palm Beach, Florida, and its founder and owner, Jordan S. Rubin, made unsubstantiated claims that their supplements treated or cured a variety of ailments, ranging from colds to cancer, and also made false claims of clinical proof.

The settlement prohibits deceptive claims about the results of tests or studies and requires claims by the defendants to be substantiated by competent and reliable scientific evidence.

Although this charge was not made specifically about Fucothin, it does cast a negative light on Garden of Life. That, along with the lack of published clinical findings, makes claims made about Fucothin questionable.

You can find a wide variety of products from the Fucothin-series on Amazon.

Fucothin claims to be a new, different weight loss supplement.

However, there is no published research to prove any of their findings.

Owned by a company with a chequered past of making false claims, Fucothin leaves us questioning its effectiveness.