Phenocerin is just the same old pill done by the same company (albeit under different corporation one of which has been inactive for many, many years). 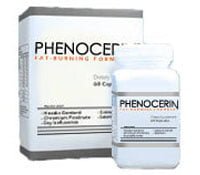 With the exception of Certiphene, it seems like they all just sat around a table and decided that one weak formulation, if it ended with the same final two syllables (cer-in), would help people lose weight.

If you go to the Phenocerin website youll see the same scam-ridden site you see at the other sites by the same company (see my review of Certiphene for a side by side comparison for how this company uses the same scam formula to sell the same product under different names and only slightly different designs).

As far as Phenocerins marketing pitch, Ill break it down for you:

Keep in mind that you have to evaluate the efficacy of Phenocerin fast enough for the product to reach our Receiving Department within 14 days of the order date.

You see what has to happen? Everything has to go off without a single hitch (even an honest mistake type of hitch, Im not including here the fact that Phenocerin Inc. might be slowing on the initial shipment or also slow to accept a return, thus pushing you outside the 14-day trial period.

And dont forget, if you dont cancel in time, theyre going to bill you $99 and send you three more bottles of useless garbage. Why is it useless? The same reason Certiphen, Lipocerin, and Thermocerin are useless.

Phenocerins ingredient profile is schwach, or, to take the German a bit further berschwach. Its weak.

Hoodia Gordonii (see my entire scathing review of Hoodia) is an ingredient they tout as being backed by clinical research.

Phenocerin pushes the fact that they have this ingredient in there, but its weak. Its a fad. Dont fall for it.

Chromium Picolinate is one of those ingredients with studies falling on both sides of the fence. Some show chromium picolinate as an effective regulator of insulin levels (which helps regulate the bodys storage of fat). Other studies conclude that it is not effective.

Amazingly enough, the study that Phenocerin cites as supporting chromium picolinate doesnt. When they cite it, they exclude an important point.

That part of the abstract that they conveniently excluded says, there was no effect of [Chromium Picolinate] on body weight, abdominal fat distribution, or body mass index.

Also, lets not forget to mention that the amount of chromium picolinate used in the study was significantly more than what is included in Phenocerin, so even if the study had proven supportive, its effective use in Phenocerin would have been questionable at best.

The companies behind these products are really just one company, operating out of Naples, FL, with little disregard or respect for your average consumer.

They use misleading marketing tactics, dupe you into an extremely disadvantageous autoship program, dubiously exclude portions of scientific text meant to support their product, and offer (the same) products with a weak, ineffective ingredient profile.

Phenocerin is a sham product.